It was quite fascinating to the scientists who studied the remains of the Harappa civilization in Mohenjodaro. The remains included various weaving equipment and self-preserved cloths. Throughout the ancient literature, we can also see weaving mentioned as something part of the living. We can find them in poems, dohas, and inscriptions on Indian temples and monuments. From this, we can clearly come to a conclusion that weaving started in India during the Vedic periods. The art of creating fabrics is an ancient tradition and technique.

But the number of handlooms and artisans has been decreasing substantially in the past decades. Pushing the artists to look for alternative sources of income. At the same time, it is also reported that the handloom association of India has reported more than Rs. 75000 Crore in revenue before the pandemic.

In this article, we are going to unravel the stories of Indian handloom and its traditions.

Indian weavers across the region 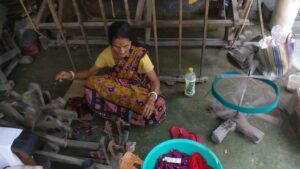 Before 50 years or so, weaving was one of the most employment-generating sectors in India. Across India, there were clusters of weavers that were making their crafts and selling them to the market.

There are mainly two types of weavers. One that weaves full time and the one that weaves after or during off seasons from farming. In rural villages, agriculture is still the dominant occupation.

The beauty of it was that each state or region had its own style of weaving and products. Some of them are still prevalent today. These occupational groups had special names and were being known as a caste. For example, Ansari and Momin are a type of caste where everyone is weavers. The people in their caste have strong links with their traditional occupations. The craft is learned by the new generation by hand to hand.

A decline in Rural crafts

Due to industrialization, there has been a steep decline in the number of people involved in traditional weaving practices. The decline was further catalyzed by the mechanization and cost advantage of manufactured products and the change in tastes of rural people and urban people.

A Story from Bengal

Weaving was practiced only by the people that belonged to the weaving caste. But as time passed, more and more people wanted to learn to weave and start their own units. People from various other castes began to learn to weave.

So the increase in weavers brought competition and internal conflict. Certain organizations started to form in villages to run the weaving units in an organized manner. 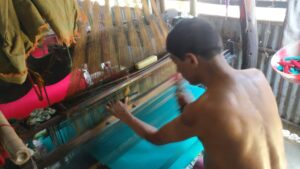 In the early days, the weavers used to sell their products directly to their customers. But as demand for handloom products started to increase, there was a gap for raising funds and dealing with international customers.

This situation resulted in creating a new set of people called the ‘Mahajans’ and ‘Paikars’. Mahajans were merchants who loaned money to weavers. But in turn, he would buy the products at a fixed price. This system also created a dependency on Mahajans. Paikars were the assistants of Mahajans who traveled across the region to lend money and collect products.

But this system corrupted the entire handloom industry as weavers got exploited. In the year 1945, the All India Handloom Board was set up by the Indian Government to boost handloom. But eventually, this system also failed and many weavers lost their earnings to Mahanjans as higher interest rates were imposed on their funds.

The modern importance of Handlooms

Traditional products are still in demand. People have a new set of values for such items. Besides, there have been many initiatives and CSR activities by companies like Microsoft to keep some of the traditional weavers busy and provide a growth path. 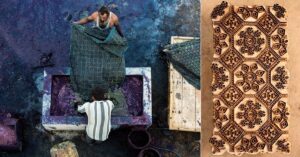 A little village in Gujarat near Kutch is home to Ajrakh block-printed fabrics. It is one of the most loved items from India across the globe. The fabrics are dyed using natural colors derived from indigo, henna, turmeric, pomegranate, iron, and mud. Beautiful patterns and motifs are printed on these fabrics that are imprinted using hand-carved wooden blocks.

This community goes by the name Khatri, has been carrying forward this tradition for more than 300 years from Sindh, being passed down to sons from their fathers.

The contemporary amalgamation of handlooms

Recently handlooms and traditionally woven fabrics are highly sought after by boutique designers and popular international brands like IKEA. Kancheepuram from Tamil Nadu, Ikat from Odisha, Kalamkari from Andhra Pradesh,  Brocade from Banaras, Bandhani, and Patan Patola from Gujarat, Bagalpuri silk from Bihar are some of the famous fabrics and items of modern India that still hold the traditional taste in the items.

Bollywood actors and stars are often seen to be wearing such items for international programs promoting the rich heritage of local Indian weavers.

Looking forward we can still see these traditional artisans being preserved for the coming centuries from losing the crafts. We can see more and more people choosing traditionally woven fabrics more in the coming years for their human touch and labor.

Where do you see the traditional weaving industry in the coming decades?